This Brown Sugar Baked Ham is hands down the best ham I’ve ever eaten. My boys go crazy for it and beg me to make it. Tender, sweet and juicy, it’s ham perfection.

With Easter just a week away I thought I would share this amazing brown sugar baked ham recipe with you.  I am not even exaggerating when I tell you that this ham will completely change your life and you will never want to eat ham any. other. way.

I have never, ever had ham this amazing before in my life.  I don’t even know how to put into words how incredible this ham is.  You will be blown away. One bite and you will be stockpiling it on your plate.

The whole process of cooking this ham is completely unique and so worth the funny smell your house will have while it’s cooking.  You boil it in vinegar and water for a few hours, I know it sounds completely strange, but it works, I promise!  After it boils the meat will be really tender and pretty much fall off the bone.  You then layer the shredded ham in a baking dish and sprinkle it with a mixture of brown sugar and dry mustard (yum!).  Cover it with foil, bake it for an hour and out comes the most sweet, tender, flavorful ham you will ever, ever eat in your lifetime. 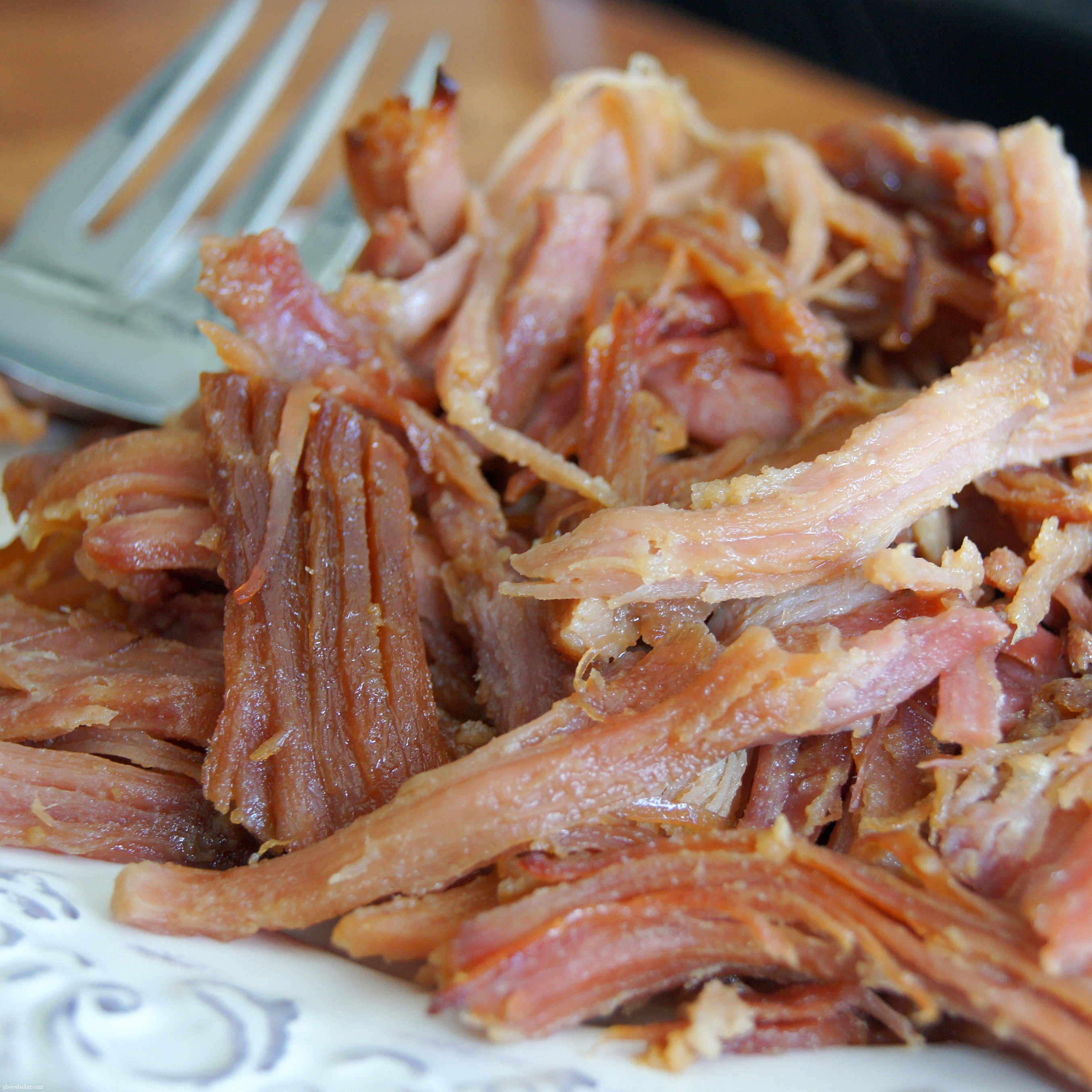 My boys beg me to make this and when I do, it’s race to see who dishes it up first.  It’s hilarious to watch and even more entertaining to hear the words that come out of their mouths along with all the oohs and aahs.  Seriously, this ham is the best you will ever eat.  Oh, one more thing, it makes the best ham sandwiches ever.  I always bake extra rolls when I make this ham because everyone wants sandwiches the next day.  (The ham is just as good cold too!) I’ve made it many times since discovering it last year over at Mel’s Kitchen Cafe and every single time I make it, it gets rave reviews from everyone.

You really, really, need to make this.  It’s life changing.  You won’t be able to get enough of it and you may even shed a few tears when the last piece is gone. . . I know my boys have.

This Brown Sugar Baked Ham is hands down the best ham I’ve ever eaten. My boys go crazy for it and beg me to make it. Tender, sweet and juicy, it’s ham perfection.

The cut of ham you use is super duper important. You DO NOT want a spiral sliced ham or else it will be extremely dry. Look for a cut of ham that is not sliced and still has the bone-in. The best is a butt or shoulder cut or shank portion. You can make a larger ham than 5-7 pounds, but you’ll need a larger pot to accommodate the ham and will also need to increase the sugar/mustard mixture accordingly). The ham can be boiled and shredded a few days in advance of baking in the oven in order to save time. Finally, be sure not to boil the ham too long or you’ll end up with ham jerky. If you’re worried about time, err on the side of taking it out at 2 hours (even if it means you are having to cut part of the ham away from the bone instead of it falling away). It should still be very tender. Larger hams will definitely need the longer boiling time.

I usually cook about a 7 pound ham and with the size pot I use I end up using about 6 cups water to 3 cups vinegar. Just adjust accordingly to your size pot. You want the entire ham covered. I also put a lid on it once it starts boiling so it doesn’t splatter everywhere.