Soft and tender Cinnamon Rolls with Vanilla Bean Buttercream, with a secret ingredient that sets these cinnamon rolls apart from any other. These are the ultimate comfort food if you ask me. You’re going to love these! 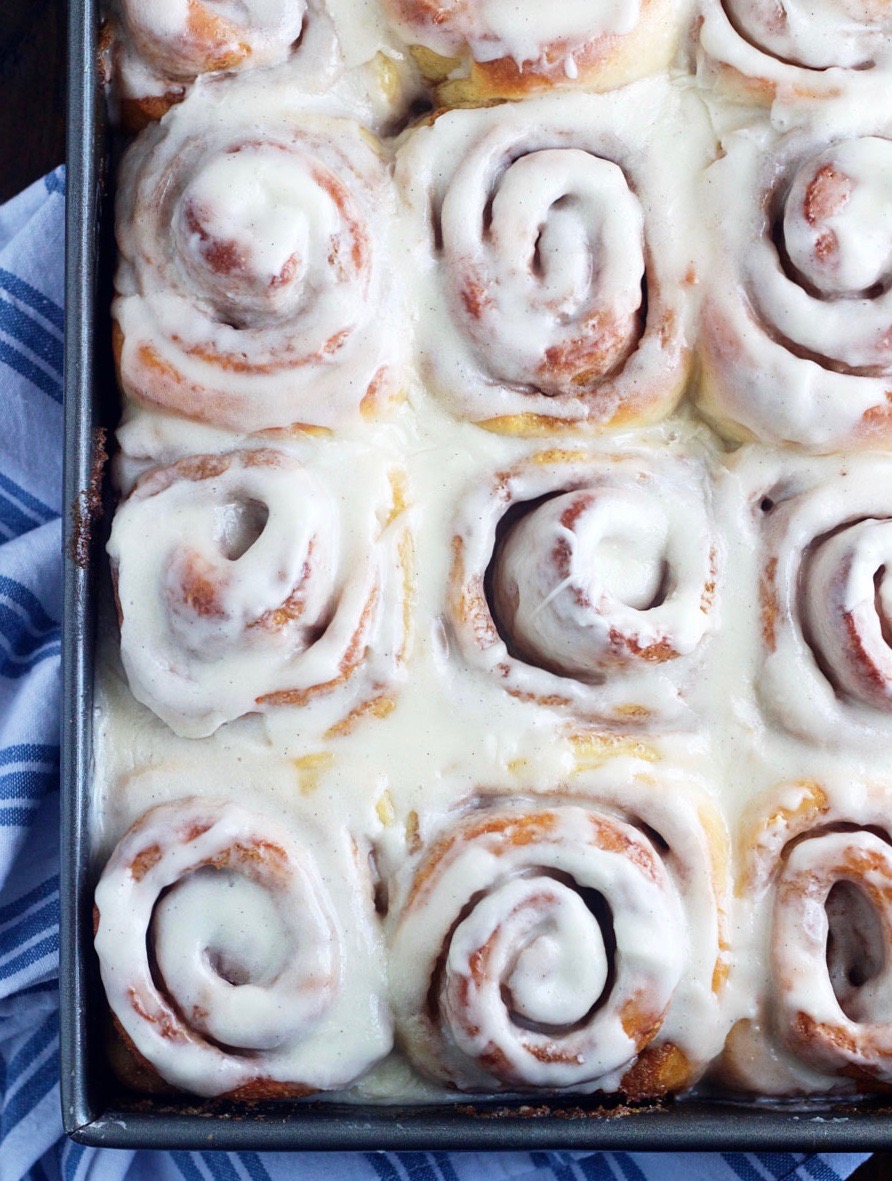 We all know I have professed my love of chocolate chip cookies over and over on this little blog of mine.

Well, today I’m here to tell you that I feel that exact same way about cinnamon rolls. And like chocolate chip cookie recipes, you can never have too many cinnamon roll recipes up your sleeve.

These Cinnamon Rolls with Vanilla Bean Buttercream are utter perfection.

The dough is amazing and so versatile. You can use it for cinnamon rolls, sticky buns, or even just dinner rolls. It’s got a secret ingredient in it . . . can you guess what it is? 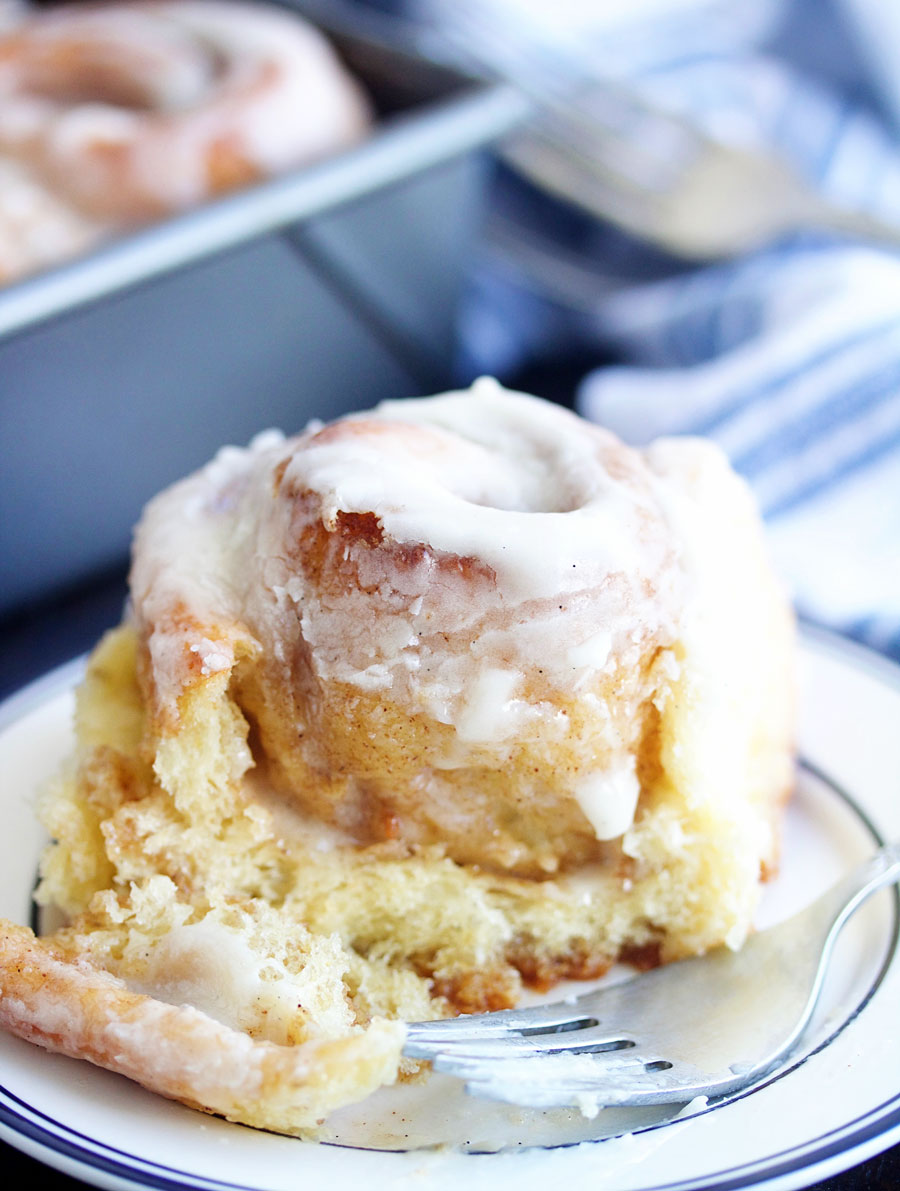 Yep, good old fashioned rolled oats. The description in the magazine said the oats add an “earthy, nutty”‘ flavor. I’m not sure that I could really detect it, but I swear those oats do something magical to this dough.

Tender, slightly airy and slightly dense, oozing with buttery cinnamony goodness and then topped with the most delicious vanilla bean buttercream. . . heaven help me!

If ever you take my advice on anything, pretty please make these Cinnamon Rolls.

I mean, only make them if you’re into delicious things like I am. However, if buttery, gooey, cinnamony,  insanely scrumptious cinnamon rolls aren’t your thing, then go ahead and ignore this recipe. 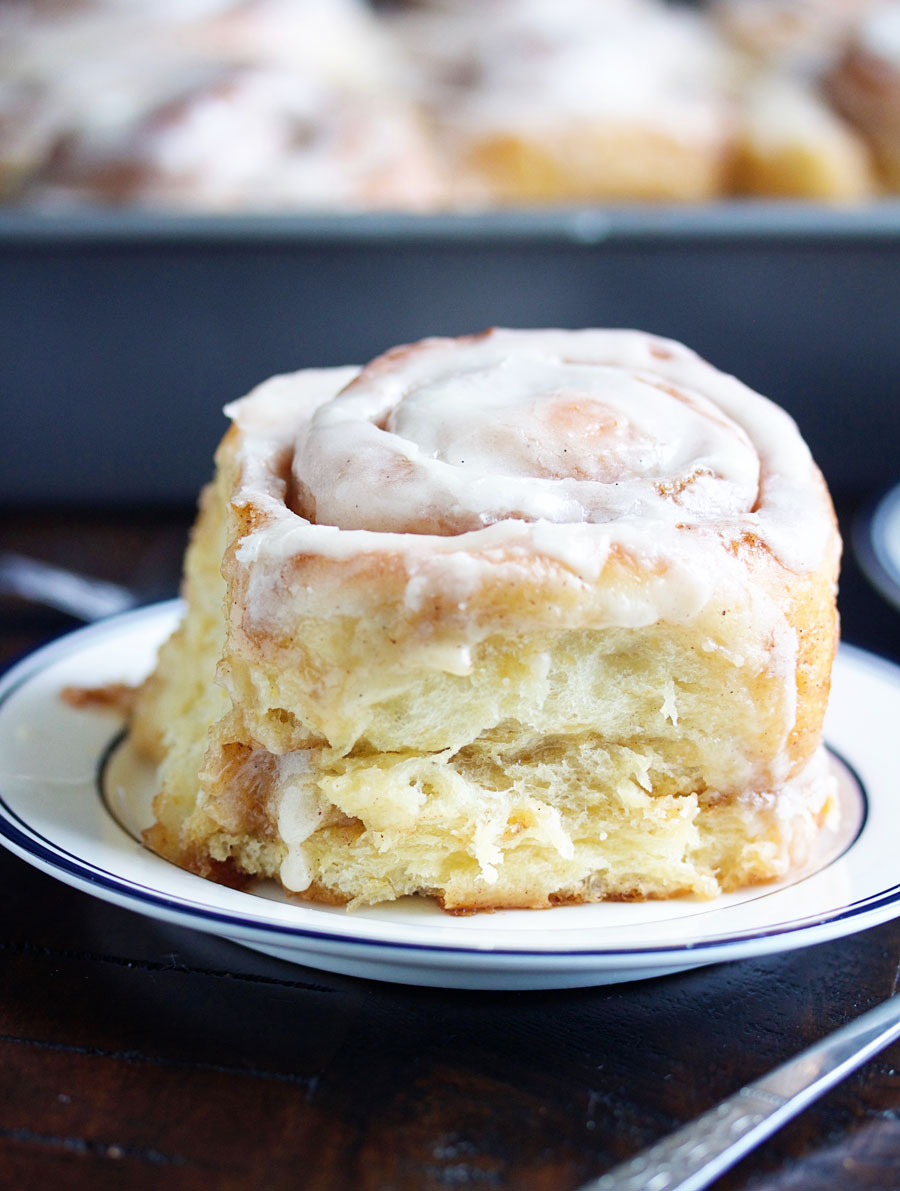 Is that the most stunning looking thing ever?! (cinnamon rolls can be stunning, right?)

With summer just around the corner and your kids being out of school, what better way to get those lazy stragglers out of bed than the aroma of cinnamon rolls baking? Let’s be honest, who can resist a warm cinnamon roll with frosting oozing down into all the little nooks and crannies?  I certainly can’t!

WHAT IF I DON’T HAVE VANILLA BEAN PASTE?

Don’t feel like you have to go out and buy some vanilla bean paste. Especially because it’s as much as $30.00 for a 4 oz bottle on Amazon right now. I bought mine at TJ Maxx a couple years ago, before the price of vanilla skyrocketed. I think I paid $7. No need to sell your first born just for some vanilla bean paste. Go ahead and use vanilla extract or if you have any vanilla beans, you can scrape a few of those little seeds out and add them into the buttercream.

SHOULD I LET THE CINNAMON ROLLS COOL BEFORE I FROST THEM? 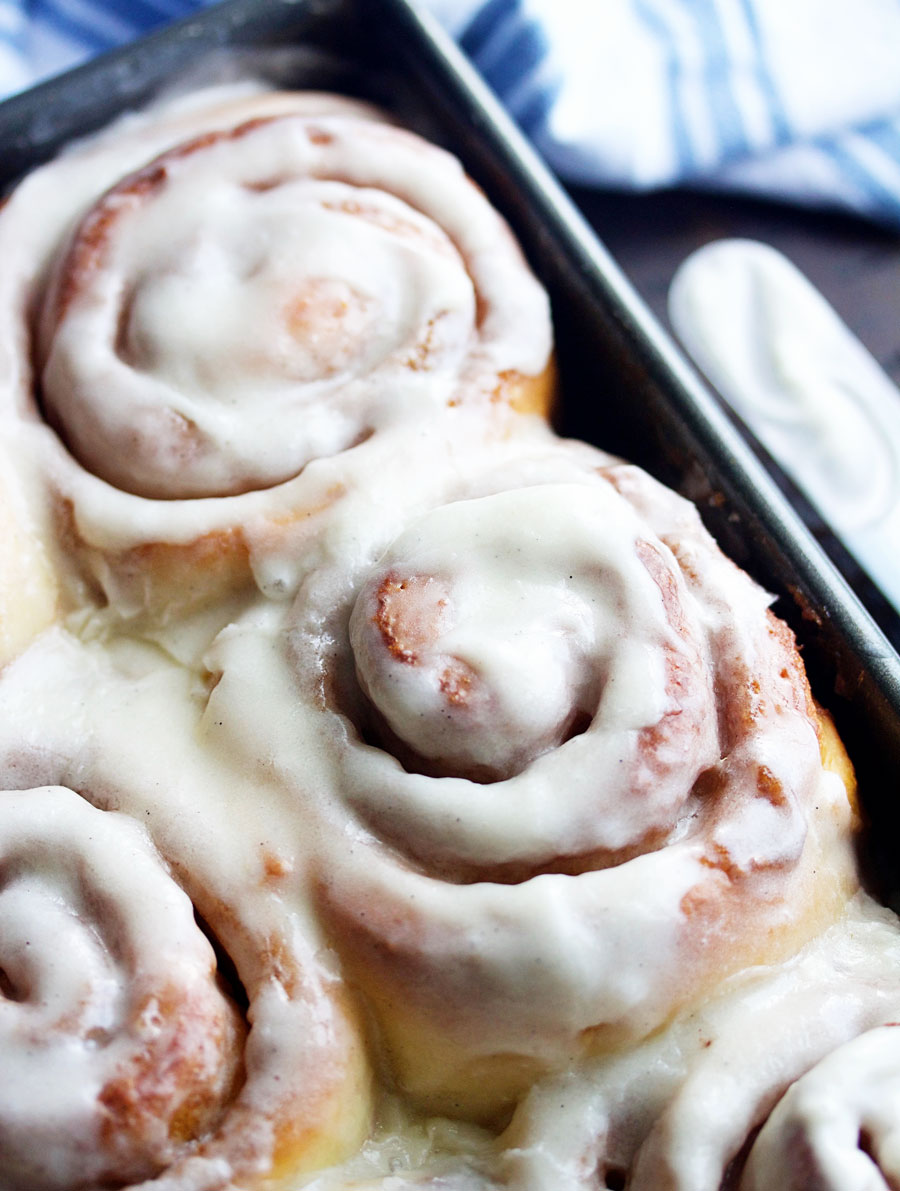 DO I ROLL FROM THE LONG END OR SHORT END?

This is actually the first cinnamon roll recipe I have ever made that has you start rolling from the short end. I debated whether or not to follow the directions just because my cinnamon roll rolling instinct/habit has always been to roll from the long side.  Turns out, I actually love how many “layers” you end up with by starting with the short end. Yes, I may have just become a “short side roller.” 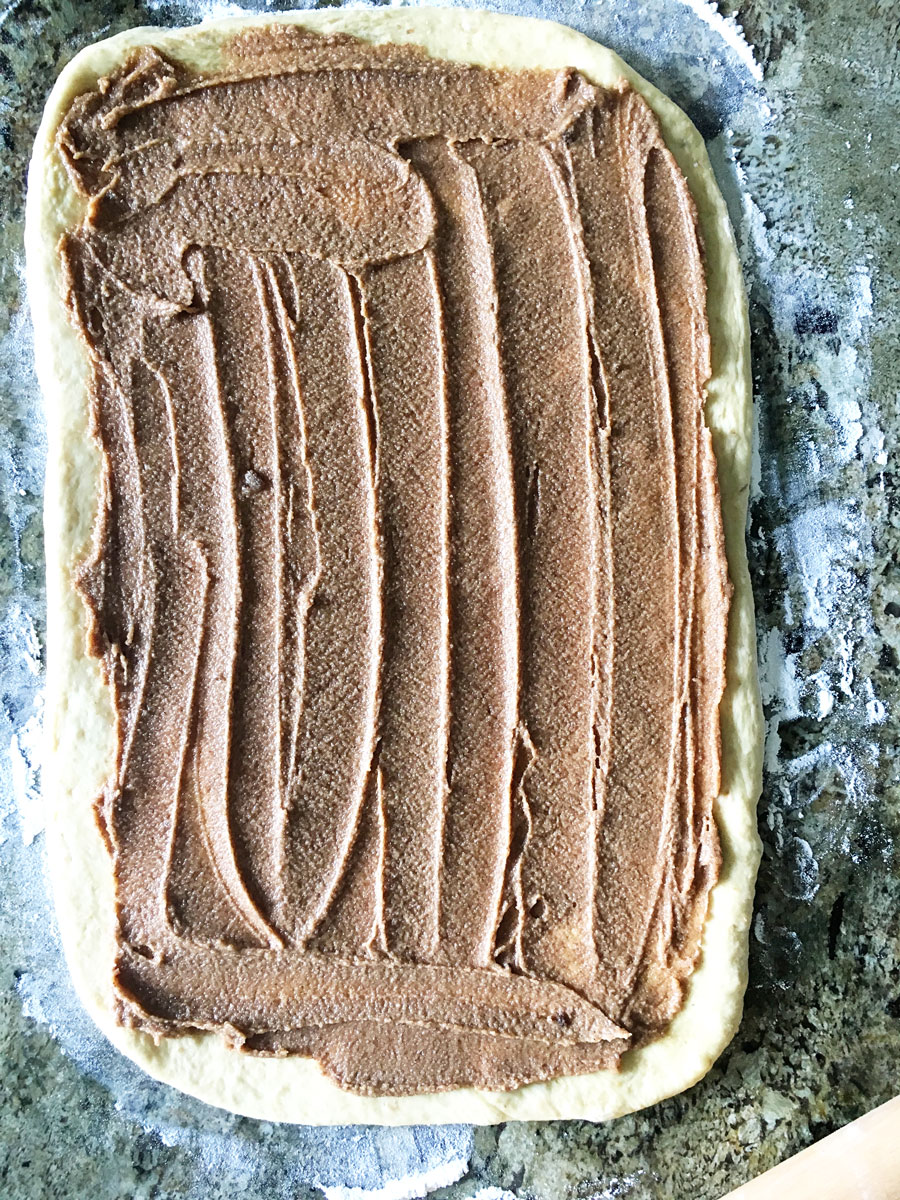 Homemade cinnamon rolls really aren’t hard to make, they just take time. If you have any questions, feel free to leave a comment and I’ll get back to you ASAP.

Now go make these and you can thank me later.

Soft and tender Cinnamon Rolls with Vanilla Bean Buttercream, with a secret ingredient that sets these cinnamon rolls apart from any other. These are the ultimate comfort food if you ask me. You’re going to love these!