I have declared my love for skillet meals many, many times before. I have so many favorites on my site, if you type in “skillet” in the search bar, you’ll find some crazy delicious and simple dinners.

There are so many reasons to love them, one of them being how simple they are.

This Skillet Chicken Spaghetti definitely won us all over the other night.

Not only did all my boys love it, but Braydon didn’t even pick out the peppers!! I can’t even tell you how HUGE that is. This kid has come so far :)! He used to “comb” through his food with a fork and pick out even the tiniest green pepper, even though I told him he wouldn’t even be able to taste it. He still did it anyway. So you can only image my excitement when I saw him eat his whole plate of spaghetti without picking through it!

Now he still dislikes raspberries (gasp!!) and all other berries for that matter,  in fact, most fruit falls under his “don’t like” list, but he ate green peppers the other night.  It’s honestly nothing short of a miracle. 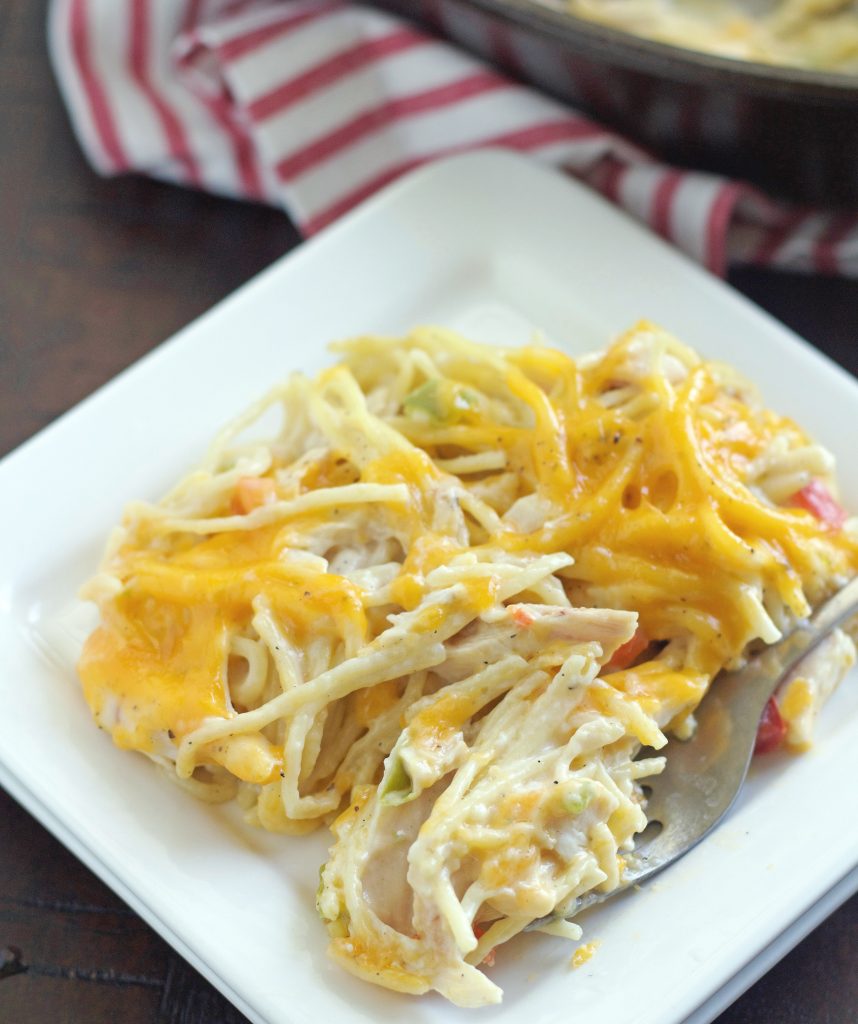 This Skillet Chicken Spaghetti is seriously delicious! I’ve been making the Pioneer Women’s Chicken Spaghetti for years and we love it! But like chocolate chip cookie recipes, one can never have too many chicken spaghetti recipes, right? There is no condensed soup in this recipe like there is in the Pioneer Woman’s recipe, so if you aren’t a fan of using condensed soups in recipes, then you will love this recipe.

I served this with some corn on the cob and a salad. . . . delicious and simple!

I hope you have a great weekend. I’m going to enjoy these last five days with my son before he leaves for the MTC. I’m trying so hard to be brave and not sad, but the closer it gets, the less brave and more sad I’m becoming. It’s hard to let your kids go for two years, but I wouldn’t want it any other way. Wish me luck!

Save this recipe for later and pin it to Pinterest