These Turtle Bars start with a chocolate shortbread crust, a decadent layer of caramel and semi sweet chocolate lightly swirled on top and finished off with chopped pecans and a light sprinkling of sea salt. They’re amazing!

You guys, these Turtle Bars.😍

I think it’s safe to say these might just be the best bar cookie I have ever eaten. Coming from someone who has eaten a lot of bar cookies in her lifetime, that is a pretty bold statement.

I knew these bars were going to be good, but you guys, they are so much more than just good. They’re phenomenal! I had to give them away to neighbors because I had no self-control.

LET’S TALK ABOUT THESE TURTLE BARS . . .

These bars start with a chocolate shortbread crust that is so fabulous (Yes, I’m already thinking about what else I can make using this crust.) The next layer starts with a delicious can of dulce de leche, butter, heavy cream, brown sugar and corn syrup all mixed together and then cooked to a softball stage. Toasted pecans are added to this heavenly caramel mixture and then it’s poured over the cooked crust. Chocolate chips are scattered on top and then swirled into the caramel layer. A few more toasted pecans are tossed on top with a little sea salt.

Are you drooling? I am!

WHAT YOU NEED TO MAKE TURTLE BARS:

This list ingredients it pretty basic and you probably have everything already in your panty, with maybe the exception of the pecans and can of dulce de leche. 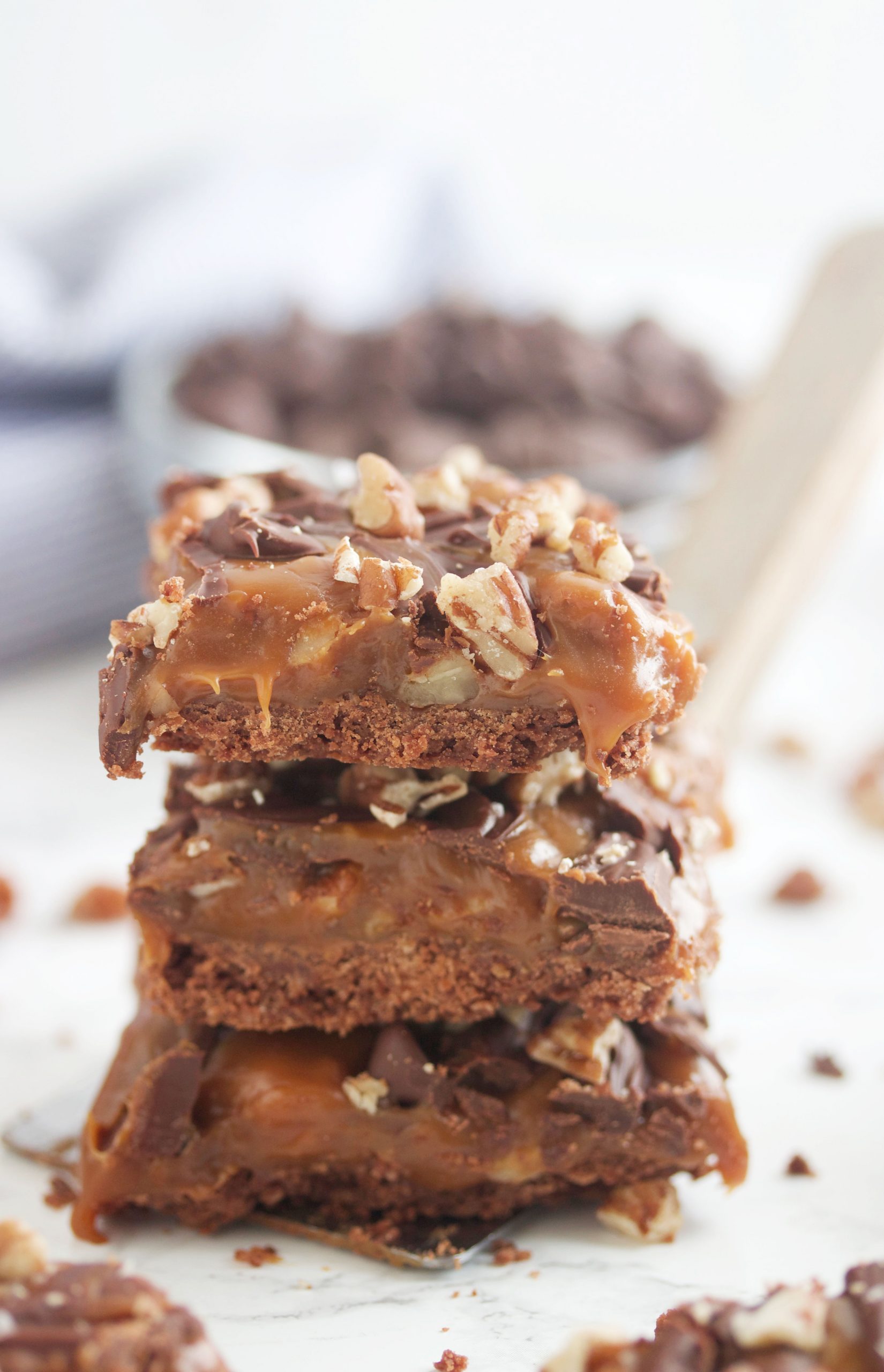 HOW DO I TOAST THE PECANS?

You can toast the pecans in a skillet on the stovetop or in the oven. I prefer doing it on the stovetop rather than in the oven. It’s faster and easier to keep an eye on the nuts to make sure they don’t burn.  STOVETOP: place the nuts in a dry skillet in an even layer. Cook over medium heat shaking the skillet from time to time and also stirring with a wooden spoon until nuts are golden brown and aromatic. OVEN: Preheat the oven to 350° F. Arrange the nuts in a single layer on a rimmed baking sheet. Bake, stirring occasionally for about 10 to 15 minutes or until golden brown.

CAN I LEAVE THE NUTS OUT?

Yes you can omit the nuts if you’re not a fan or if you have a nut allergy. Keep in mind though, these bars will no longer technically be “turtle bars”, but more like “caramel bars.” I’ve mentioned many times that I am not a fan of nuts in most baked goods, but I think the toasted pecans in these bars are a must! 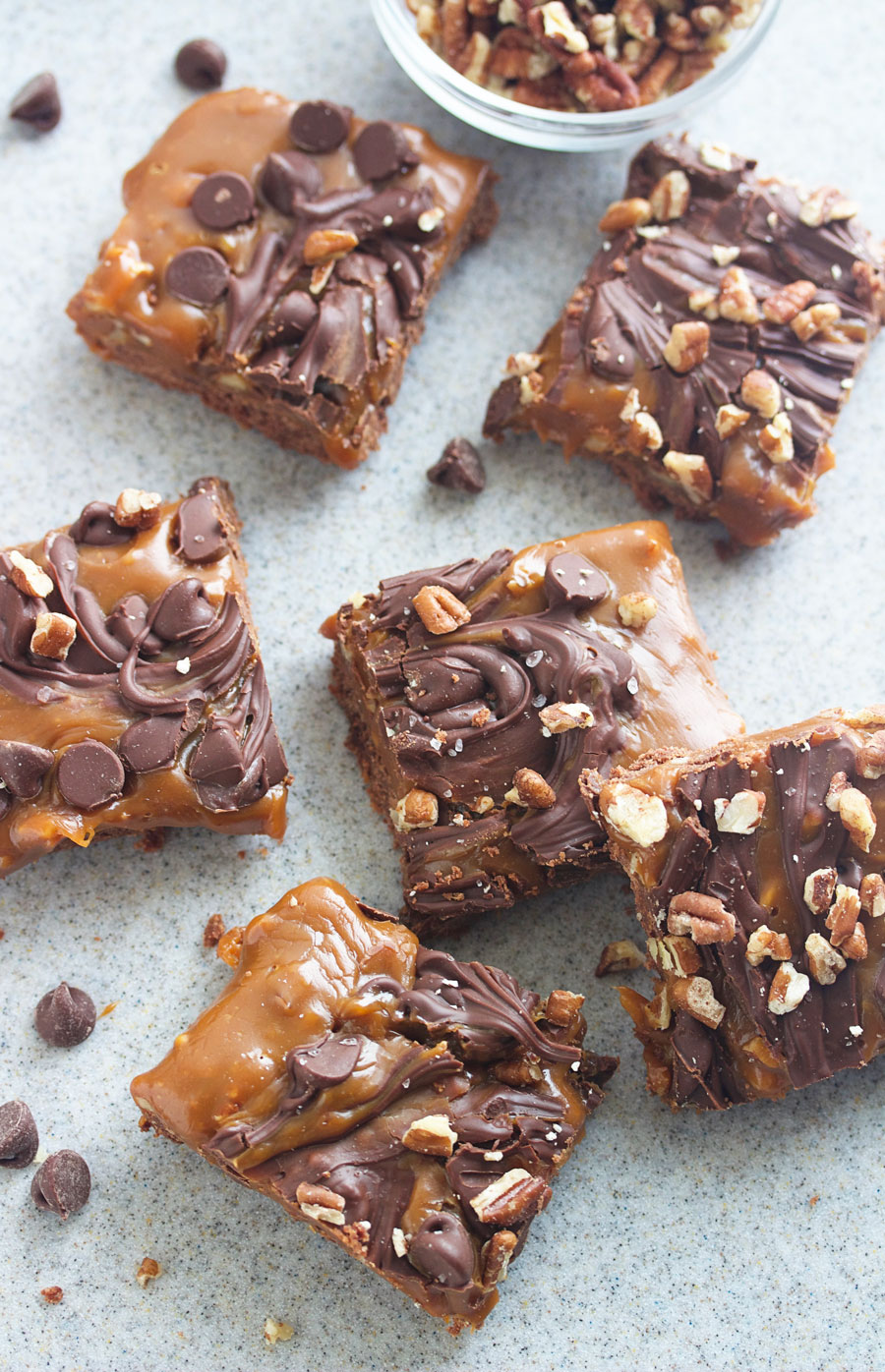 Just look at all that caramel and chocolate swirled together. My mouth is watering just looking at these pictures. I wish I had some of these left because they would be my lunch today. . . probably a good thing they’re gone.

These Turtle Bars start with a chocolate shortbread crust, a decadent layer of caramel and semi sweet chocolate lightly swirled on top and finished off with chopped pecans and a light sprinkling of sea salt.